So you’ve decided you want to live in a van.  Great!… Now what?  Well, the first step is to acquire the van itself, which is one of the biggest and scariest steps of the entire process.  Building a van unfortunately means jumping off the deep end and learning to swim once you’re in the water.

Choosing a vanlife for campervan life is much like buying a house.  It is going to be your house, after all, and it can feel a little overwhelming deciding on the right van.  Having gone through the arduous process ourselves, we’ve taken the time to gather many of the necessary comparison points so you don’t have to.  We hope this helps.

A word of caution: Everyone wants the best deal when buying a van, but vanlife is an investment, just like buying a house.  Buying a cheap used van to start might seem like a steal, but there’s generally a reason for low pricing. Any money you save initially you might end up dumping into repairs.  That’s my biggest recommendation to keep in mind throughout the entire van building process.  Pinch pennies where you can, but DO NOT GO CHEAP where it matters.  Paying a little more for quality to begin can save you a whole lot of money in the long run.

Tell me what you want (what you really really want)

Before you start shopping, think about what you want.  Make a list of your ideal features and star the things you do not want to compromise on.  For example, we knew we wanted a van we could stand up in.  Granted, we’re both an imposing 5’5” so it was a low standard, but it still ruled out pretty much any low roof cargo van, VWs, and Westfalias.  Let me just say now that I admire people who live in those kinds of vans because to me, hunching over doesn’t belong in a home.  Standing up straight in our van was the one luxury we would not compromise on.  Everyone has one of those, and it’s okay.  Remember, you are still living in a van which means there will be a lot of luxuries you’ll need to compromise on; make sure you think about what ones you don’t want to have to.

This is where having a rough plan for your camper van comes in handy.

Here are some questions to ask yourself before you start shopping:

A few more things to consider:

Gas: Gas is hydrocarbon blend that produces flammable vapors and will evaporate if stored for long periods of time.  Gas enginesinject air and fuel into the cylinder, compress it, and ignite it with a spark.

Diesel: Diesel is a non-volatile fuel, meaning it can be stored without risk of evaporating.  It’s generally safer to store as well because its vapors are not flammable but the actual liquid does have a lower combustion temperature than gas. Diesel enginesatomize fuel and inject both it and air into the cylinder where they are compressed to the point of combustion.  No spark required.

The general consensus: Diesel is financially less ideal, but it makes sense in very specific scenarios, specifically if you’re towing anything heavy or have a vehicle over 35ft in length (so RVs really).  For your basic camper van, gasoline is both easier to maintain and cheaper.

Types of Vehicles for Campervan Conversion

This website isn’t a guide to RV living.  Why?  Well, because right now it’s a website about van building and RVs require little to no building (unless you’re gutting one and renovating it).  But, it’s definitely a popular and viable option for road travel so we’ll touch briefly on types of RVs.

These are the behemoths of the mobile home community, capable of going anywhere and everywhere (at no small cost to your coin purse unfortunately).  Unimogs, or overland campers, are basically a regular trucker chassis with a cabin mounted on the back.  Common vehicles used to create unimogs are garbage trucks and old army vehicles, which is why they can be difficult to obtain for the general public.  Most of foreign designed in Germany, Austria, and Switzerland, hence why many are called “Swiss campers”.  Mercedes Benz does actually make a unimog line that’s more readily accessible but get ready to pay upwards of $200,000 for it.  You can definitely think of it in terms of buying a house (in which case it’s doable and comparable) but still out of the price range of many prospective van dwellers.

If not totally sure what overland vehicles look like, check out @overland_kitted on Instragram to see what we mean.

Literally just retired school buses or sometimes (less frequently) retired charter buses.  These “bus nuts” or “skoolies” “apparently never went through that phase in middle school of being miserable riding the bus.  All jokes aside, though, bus life is a pretty cool way to go.

The original vanlifers, people have been living out of VWs since the 1950s.  VW vans are typically broken into 3 types based on their general body type:

These are pretty much mini RVs crammed into the body of a full-size cargo van.  One of the most popular newer models of these are the Leisure vans, which include three different tiers of campers depending on the base vehicle (i.e. Ford Transit vs. Mercedes Sprinter).

Of course, there are TONS of nuances within this class and choosing the right Class B for you is a different beast in an of itself. If you end up taking this route or are even considering it, I highly recommend checking out this article all about Class B campers by Your RV Lifestyle. This is a great resource for RV specific questions, since RV-life is a little trickier in some respects (and easier in others) than straight up vanlife.

A more recent develop in the vanlife community is box truck dwellers.  You can buy retired box trucks from many companies, especially moving companies like U-Haul.  Unfortunately most of those are retired for a reason and low prices are typically found with “engine not running”.

The “blank slate” of van building and recently, the most popular means of breaking into vanlife.  Designed primarily for contractors and other workers to load in tool and building materials, these are rugged, durable vans with high payloads and reinforced axles so weight isn’t much of a concern beyond gas mileage.  Even the heaviest of cargo vans still get better gas mileage (and thus lead to more sustainable vanlife) than most RVs.

You can get either windowed passenger vans, which usually include seats you’ll need to rip out, or just the basic, windowless cargo van.  The exterior bodies of these vans are also very customizable, easily up-fitted with solar panels, roof racks, bike racks, and beefed up tired designed for off-road use.

Keep in mind that most of these vans are not 4×4 unless you get a Mercedes Sprinter or a newer Ford Transit (in which case you’re looking at paying close to double than you will for any other cargo van, even new).  You can also consider converting any van into a 4×4 using Quigley 4×4 but a conversion will cost you another $10,000 minimum on top of the rest of your build costs.

The great thing about cargo vans is that there are virtually unlimited options for buying them, and there’s no shortage of them on the market.  However, you might have to do some serious digging to find a used one with low mileage at an affordable price.  In the end, we opted to buy new because it was actually more cost effective for what we were getting.

You can also look around at the Sportsmobile forum to get an idea of used already converted cargo van prices and even custom design your own.  Even if you don’t have the money to spurge on one of these, it’s a good place to look just to get an idea of the cargo camper van market.

This was the option we went with, and thus all of our van life and van building guides are based from the experience of a converted cargo van.

Now that’s we’ve covered the basics of cargo vans, let’s dive a little deeper into the differences between some of the most popular models.  Again, there is a mid-blowing amount of variety on the cargo van market, but here are some common camper van base vehicles.  Keep in mind the specs will differ slightly even between years of the models, but this chart will give you a good idea of at least how different makes stack up to each other.

These vans are actually relatively new vans on the auto market.  For years, domestic car companies kept around the same design with little modification for year to year (such as the Ford Econoline vans).  This was primarily due to lack of competitions from a 1963 implemented “chicken tax” which charged an extra 25% on top of all foreign light truck imports.  Without foreign competition, domestic dealers could get away with the same vans. It wasn’t until 2001 that Mercedes-Benz came up with a way around the chicken tax (basically making their van abroad, disassembling it, shipping it to the U.S., and reassembling it so met all technical American-made standards”).  After 3 years of a best-selling Mercedes Sprinter, domestic manufacturers stepped up the same and brought new models to the market, which is where get the four major cargo van models of today.  While manufacturers didn’t make them with camper van conversion in mind, they’ve become best sellers in the business.  The four major cargo vans are:

Note: These are only the cargo vans.  You can also passenger vans (or wagons) for just about every one of these models.  We choose to include only cargo vans because they are typically the first choice for van conversion.

Written by: Amber, vagabond and rockclimber that enjoys total freedom that living in a van can offer. Originally published in: Always the Adventure. 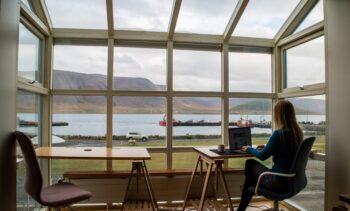 How to find a remote job? We asked Ya...

How Much Does it Cost to Be a Travel ... 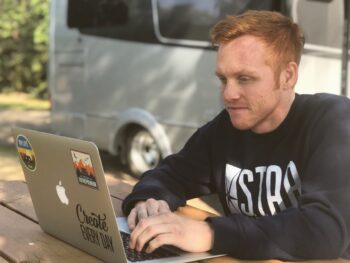