Brent on the left, Michael on the right.

What is this “digital nomad” business anyway?”

We’re a gay couple of more than two decades, and we’re both writers — Michael writes novels, and Brent writes novels and screenplays.

In 2016, we owned a nice house in Seattle with a good circle of friends, but we weren’t especially happy. That was due to a number of things:

So we decided to sell our house and travel the world. The plan was to move to a new country every few months, at least until we found a place where we wanted to settle down.

We were lucky because our jobs as writers made it so we could work anywhere we had access to the internet.

We spent 2017 getting ready: preparing our house to sell, downsizing our belongings, and moving our lives into the cloud.

But where would we live? Would we feel isolated? Would it be dangerous? What about the language issue? And how expensive would all of this be?

It was really hard to visualize our life ahead, and kind of scary, because we’d never personally known anyone to do anything like this. And even though it was only three years ago, there were fewer resources online.

Michael had backpacked through Australia for a couple of years in his 20s, but this was all new to Brent. And he wasn’t — and still isn’t — a particularly adventurous person. Neither of us likes taking huge risks.

But somehow it still felt right.

Then one day while we were still making our preparations, we saw an article in the New York Times about something called “digital nomads.”

“Hey!” Michael said to Brent. “I think this might be what we’re planning to do.”

Finally, we had a term — digital nomad — to describe our future lifestyle.

We left Seattle at the end of 2017. We spent the winter in a “cohousing” community in Miami, Florida, designed specifically for digital nomads.

And we loved it. We loved the newfound simplicity and intentionality of our lives. We were carrying everything we owned with us, so in order to buy something new, we literally had to get rid of something old.

After three months, we left Miami for Europe, spending seven weeks in the island country of Malta (in the Mediterranean). Then we moved on to Matera in southern Italy, followed by Bansko, Bulgaria, in Eastern Europe for the rest of the year. In 2019, we headed to Asia, first spending three months in Koh Lanta, Thailand, followed by two more in Hoi An, Vietnam. Then it was back to Europe, to a village in the Swiss Alps for a month. And now we’re in Tbilisi, Georgia, for the fall.

Along the way, we’ve made shorter stops in cities like Lisbon, Barcelona, Geneva, Bologna, Rome, Athens, Istanbul, Florence, and literally dozens of other places.

We’ve had lots of crazy adventures along the way. Some were scary, like the time our apartment in Bulgaria caught on fire. Or when our plane across the Atlantic caught on fire and had to make an emergency landing in Boston. (At this point, we’re not a big fan of fire.)

Of course, most of our adventures were much less frightening: midnight gondola rides in Malta, hiking the impossibly steep Swiss Alps, and bike-riding through the rice fields in Vietnam(okay, here we had to dodge the occasional water buffalo, but at least none of them were on fire!).

In an effort to reduce our carbon footprint (and because it saves us money), we often take ships between continents, which has the added benefit of allowing us access to more out-of-the-way ports of call like the Azores, the Greek islands, and Basseterre, St. Kitts.

We were pleasantly surprised — even downright shocked — by how much cheaper it was to live as a digital nomad, especially when you spend time in countries that are less expensive by Western standards.

Digital nomading is a phenomenon that’s exploding in popularity right now. It’s driven partly by changes in technology: the world is more connected than it’s ever been. And more and more businesses, and business opportunities, can be done remotely.

Dinner with friends in Matera, Italy.

More than anything, we’ve loved the people we’ve met: smart, funny, passionate, quirky digital nomads from all over the world, as well as locals generous enough to invite us into their lives.

We’re both introverts, and not into the party scene, and we really did worry it would be hard to make friends. Plus, most digital nomads are in their 20s and 30s — younger than us — and we wondered if they’d think of us as their peers.

We soon discovered that digital nomads were as open to new friendships as we were. Why wouldn’t they be? They’d left their old lives behind just like us. Life on the road is nothing at all like the judge-y or cutthroat social circles we’d traveled in as writers in Seattle, Los Angeles, or New York.

The life of a digital nomad means you’re constantly saying hello, and also constantly saying goodbye. But after two years of doing this, we’ve also discovered that you can say hello to the same people again, by meeting up with old friends in new countries all over the world. This may be our single favorite thing about this lifestyle.

Meanwhile, plenty of locals are as fascinated by people outside their country as we are fascinated by them. The truth is, we humans really are far more alike than we are different.

Which isn’t to say we haven’t had an education in just how shockingly privileged Americans are. And how differently LGBT people are treated all over the world.

In short, our lives of anxiety and routine in the United States have become lives of excitement and adventure in the rest of the world.

Our careers as writers have continued their ups and downs. In 2019, one of Brent’s screenplays, Project Pay Day, was produced as a feature film (and since we have no permanent home, we were able to travel to Pennsylvania for most of the shoot). But there’s been plenty of new rejection as well.

Funny thing, though. Our lives have become so rich that those rejections don’t get us nearly as down as before. We’ve got too many other things to focus on.

Of course, bad things do happen (and they usually seem to involve fire!). But the reality is that life on the road is far less stressful than our lives in Seattle.

Sadly, we haven’t been able to do to do anything about the American political situation — though the truth is, we now feel like we have much more control over at least our own destinies.

A month after leaving Seattle, we looked at each other and said, “Leaving home may have been the smartest thing we’ve ever done.”

Our opinion of being digital nomads has only kept rising since then. It sometimes feels like we’ve unlocked one of the secrets to the universe. We’ve never been happier or more satisfied with our lives. And while this lifestyle may not be for everyone, it isn’t only for the young and crazy-adventurous either. And it certainly doesn’t have to be a temporary “gap year” thing before you start your “real” life. This can be your real life.

In Brent and Michael Are Going Places, we’re telling the full story of our travels — warts and all. (But honestly, there aren’t that many warts. We’re not trying to be aspirational; that’s just how it’s ending up!)

Some people tell us they’re considering a digital nomad lifestyle themselves, or they simply enjoy travel. As a result, we like to share practical information about the nuts and bolts of our newfound lives.

Other people say they enjoy our travels vicariously.

Goodbye for now until our next hello!

Written by: Brent & Michael, a nomadic gay couple that are passionate about writing books and blogs. If you would like to get in touch with them, feel free to contact them via Facebook. Originally published in Brent and Michael are going places.

Dealing with the covid crisis as a Di...

Interview with Beth, a DN from Austra... 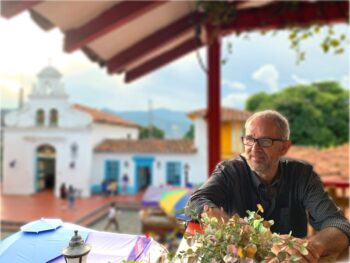 Interview with Jan, one of the most i...