How a $15 bag of potatoes changed my life4 min read

How a $15 bag of potatoes changed my life4 min read

I’m having my mid-life crisis.

Not a buy-a-red­-convertible or get-a-hot-new-twenty-something-guy kind of mid-life crisis, but the sort you have when you get home from a three-month digital nomadding stint in Vietnam and discover that bags potatoes have jumped to $15 (seriously! WTF potatoes?)

You then re-evaluate where you are in life, what’s most important to you, who you want to be, and how much tubers cost elsewhere on the planet and then decide to move to a different hemisphere. Screw you, potatoes. That kind of mid-life crisis.

We’ve sold our house (the sign even has an official SOLD sticker on it now), we’re selling all our stuff (anyone need a dining table or queen bed?) and downsizing everything into 1.5m x 1.5m storage locker. Gasp!

We are moving back to South Korea for an unknown period of time. Maybe a year, maybe less, maybe more.

Our digital nomadding adventure in Vietnam last year was life changing in some completely unexpected ways. I don’t need a big house filled with lots of stuff. I don’t want to spend the next 20 years of my life making banks, insurance companies, utilities, potato farmers and my local council wealthier. I need time and space with low overheads and financial pressure to get ahead for a change. I don’t want to spend 2.5 hours each week vacuuming and mopping the floors of our stupidly large home. We’re going backward in Melbourne, and it’s time to stop that slide.

With less financial pressure burdening us, we’ll have more time to enjoy life and work on growing a solid business together, rather than having to take on every single scrap of copywriting work that comes my way only to see that money go straight out again making the big fat corporations richer. I’m getting off that hamster wheel, for a while, anyway.

I had big plans for my three months in Vietnam and I barely made a dent in them, but I realised that all I needed was more time and less overheads to achieve my goals. Korea seemed the logical next choice so the Monsta can get acquainted with his father’s native language and develop a relationship with his grandparents and we can eat as much bibimbap as we like. And potatoes.

When I first moved to Korea in 2001, I was 28 and on the run from a broken relationship, psychotic ex-boss and a tangled life in Melbourne. I certainly wasn’t looking for a complication to add to my tangled mess when I sat next to the most beautiful creature I’d even seen at the London Hof, at a bar in Pohang, South Korea.

I didn’t expect to take that beautiful creature with me when I left Korea for China seven months later. But here we are, 15 years on and we’ve created another even more beautiful creature — out little Monsta who loves Korean food but barely speaks a word of Korean and doesn’t have a relationship with the other half of his family.

But he has such a deep connection with our family here, and that’s the hardest thing about leaving. It feels incredibly selfish, but at the same time, like the right thing to do for us, for now. It’s not forever and the Monsta and I will be back every two or three months for a visit. Cos that’s how you can roll when you don’t have big overheads.

We’re like a boulder now, rolling down a mountain. The momentum is behind us and we can’t stop. I just hope there’s a soft landing in the suburban outskirts of Daejon when we arrive on March 2nd. I know, right? That’s only three weeks away.

I’ll be sending more updates once we’re in Daejon and settled. I’ve been keeping quiet until our house was sold and our family knew what we’re up to. It’s a relief to be able to finally speak about it publicly and share our plans. And my disdain for the price of potatoes.

Written By: Sandra Muller, a ‘digital plonker’ – a location independent worker who prefers to stay in the one place for an extended period of time. Originally published in The Digital Nomad Blog.

Where can Digital Nomads currently tr...

Our Favorite (Lesser Known) Cities on... 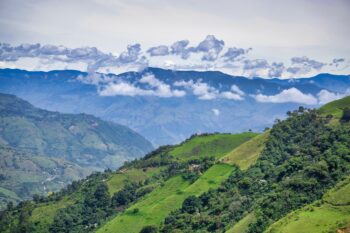